All block level elements can be thought of as occupying rectangular boxes on the screen. These boxes have the following elements which can be manipulated: 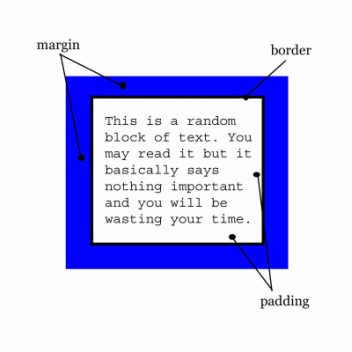 The Padding is the space between the content of the element (the text, in this example) and the border.

The Border is the space between the padding and the margin.

The Margin in the space between the border and the boundary of the element with other elements on the web page.


The box model can be used to structure elements on a page. For example, the Margin can be adjusted with the following property codes:

The Border can be adjusted with the following property codes:

You can also set the border width. This thickness of the border can also be adjusted with the keywords THICK or THIN:

Border color can be adjusted as follows:

All of these properties can be combined into a kind of shorthand with the following format:

Just be sure to put the properties in the order shown: line style then line width then color.

The Padding can be adjusted in a similar way to the margin and the border:

An element's overall width and height can be adjusted as well:

NOTE:
The Box Model is often used by web designers to design sections of a web page. For example, the entire page may be surrounded by a <div> tag with margin, padding, and/or border properties set.
Powered by