1. Before deciding to litigate (take a dispute to court) many people try alternative dispute resolution or ADR:

2.Jurisdiction (power and authority to hear a case):

3.  The United States has a dual court system, one at the federal level and one at the state level.The U.S. Constitution and the Constitutions of the individual
states spell out these systems.

4.  The Federal System
a.  Federal  courts have jurisdiction over
i.  Actions in which the U.S. or a state is a party
ii.  Cases that raise a federal question
iii.  Diversity of Citizenship cases (actions between citizens of different states, between a U.S. citizen and a citizen of a foreign nation where the
amount of money in each case involved exceeds $75,000)
b.  The U.S.  Supreme court hears cases involving ambassadors, state government as a party and  federal/constitutional matters.
c. The Federal Court System is organized as follows: 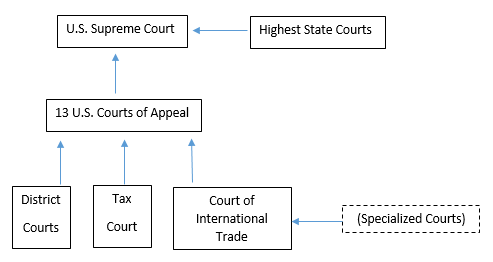 a  .State courts have jurisdiction over all matters involving those not specifically  delegated to the federal government by the U.S. Constitution.These include
marriage/divorce, child custody, wills, etc.
b.  The NYS court system is organized as follows: 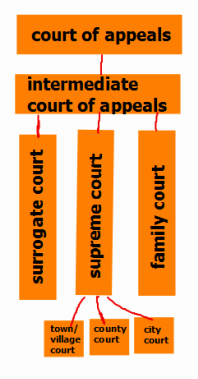 10. Steps in a Criminal Trial:

a.  What are  some arguments FOR and against the system?
b.  Is it  fair?
c.  Does it  always work?
d. What  concerns do some people have with the jury sytem?
Powered by