Data Types
int =         Integer (whole numbers)
double =   Decimal numbers
boolean = True/False
char =      A single keyboard character surrounded by ' '
String =    Series of characters surrounded by " "
Variables & Casting
Variables are memory locations which hold data. Once a variable holds data of a certain type, it cannot change types except under specific conditions. To explicitly change the data type, you can use casting. For example:

Methods
These are also called functions. They usually are named starting with lowercase letters and are verbs because they do something. Example:

In the above method, named ​getData, there are two formal parameters: an integer called num and a boolean called status. The function returns a String variable which is locally defined as message within the function.
The Main Method
Every program must have a main method. This is where the program will start running. The Java main method is:

If statements set a condition as to whether a line or block of code will run or not.
Example 1:

Note that there is no semi-colon after the "if" line, only at the end of the statement underneath it.
Example 2:

When the number of times to run the loop is not known, a while loop should be used. Example:

When the number of times to run the loop is known, a for loop should be used. Example:

Operators
Operators can be mathematical, relational, or logical. They are often used in control structures to make decisions.

Classes
A class is a blueprint for objects. Multiple, individual objects can be created from one class. Most classes have the following parts:

1. A constructor that organizes an object with default settings
2. Variables
3. Methods 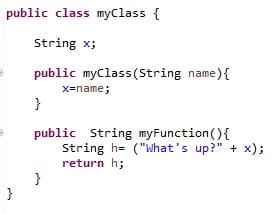 Objects
Objects are instances of a class. They have properties and can perform functions. An object could be created from the above class as follows:
​

​This function call would result in "What's up?Hermaent" being output to the console.
Powered by